The study of English brings MCS pupils into contact with some of the most arresting, challenging and exciting writings from the past 650 years. It both sparks and begins to satisfy pupils’ curiosity about the ways people and societies have shaped their responses to the world and to each other.

"A reader lives a thousand lives before he dies... The man who never reads lives only one."

Throughout the school, pupils’ enjoyment of reading is nurtured by the study of inspirational prose, poetry and drama. They adopt a critical mindset, learning to question their own assumptions as readers as well as those of the works and cultures they study. And as writers themselves, they are guided in expressing their ideas with power, precision and tact. 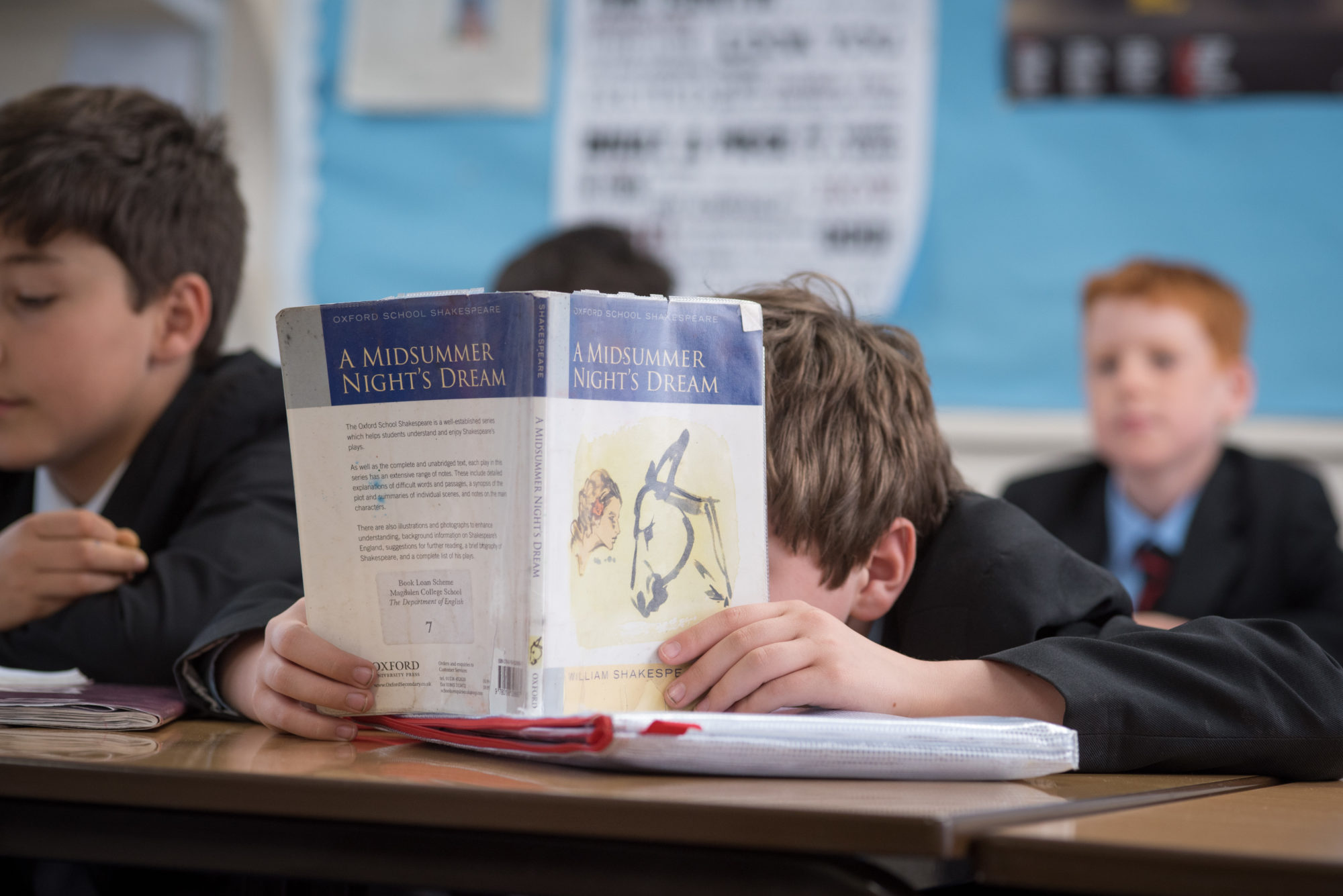 ‘But words are things, and a small drop of ink, falling like dew, upon a thought, produces that which makes thousands, perhaps millions, think…’

Our aim in these years is to foster a love of literature as well as to ensure the boys are equipped to express themselves with clarity and elegance, orally and on paper. In the Lower School, the development of the boys’ creative and analytical writing skills is driven primarily through the close study of a wide range of poetry, prose and drama, complemented by creative writing, drama-based activities, practice in public speaking and debating, and work on grammar. Boys are encouraged to read widely and deeply through regular library lessons, targeted reading lists, and an annual ‘reading challenge’.

After a Lower Fourth in which they begin to think more synoptically and conceptually about literature, boys embark on their GCSE courses in the Upper Fourth and Fifth Form. From 2021, MCS will enter pupils for the AQA GCSEs in both English Language and English Literature, for which they study in detail a Shakespeare play (typically Macbeth), a nineteenth-century novel (Pride and Prejudice or Great Expectations), an anthology of both canonical and more recent poetry, and a contemporary novel or play. In preparing for English Language, they encounter a wide range of non-fiction prose and literary fiction from the last 200 years, and practise becoming more accomplished writers themselves.

Pre-U English introduces pupils to some of the best writing from the late 1300s to the present day. The course ranges widely across and beyond the traditional canon, whilst sharpening pupils’ skills in textual analysis. They are encouraged to make connections between the texts studied and to explore them within their intellectual, cultural, social and historical contexts. The subject is highly valued by universities and employers for the skills it fosters in thinking analytically, reading sensitively and sceptically, and approaching problems creatively. In the Lower Sixth, pupils encounter writings from a wide range of historical periods, literary movements and English-speaking cultures. They work on expressing arguments concisely and persuasively, considering critical and theoretical approaches to literature, and evaluating others’ views perceptively. In the Upper Sixth, the bulk of the set texts are studied in depth, while pupils complete a Personal Investigation on a combination of texts that reflects their interests and passions in the subject.

Refer to the Sixth Form Curriculum guide for a more detailed breakdown of the English Literature programme in Sixth Form.

If you are thinking about studying English Literature in the Sixth Form at MCS, you might want to start reading around the subject before you join. Our Study Preparation guides are a useful tool, detailing further reading around key topics.

‘To me, literature is a calling, even a kind of salvation. It connects me with an enterprise that is over 2,000 years old. What do we have from the past? Art and thought. That’s what lasts. That’s what continues to feed people and give them an idea of something better.’ Pupils take advantage of a very wide range of co-curricular opportunities in the department.

There are several trips each term to see plays in Oxford, Stratford and London; lectures, poetry readings and collaborations such as Writers Make Worlds further broaden pupils’ experience of the subject.

‘This is one of the great and wondrous characteristics of beautiful books ... that for the author they may be called Conclusions, but for the reader, Provocations.’

Where English could take you

English at MCS might provoke pupils in numerous ways. Least measurably but most importantly, it might incite a lifelong love of reading and a sensitivity to the power and subtlety of language. More practically, the skills it hones in and through reading, writing and thinking are essential in academia and the workplace. Typically ten or so Old Waynfletes go on to read English at leading universities annually, including Oxford and Cambridge, before pursuing careers in academia, the arts, law, the city, and numerous other areas.